Today I receive an illustration from a friend. Have any of you ever wounder how picture speak for itself? You decide. Well, you can find.... 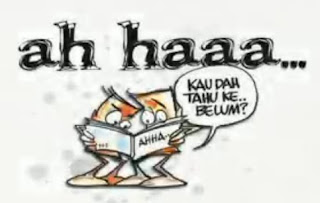 Posted by Muhammad Abdullah Bin Zaidel at 10:01 AM 4 comments:

Email ThisBlogThis!Share to TwitterShare to FacebookShare to Pinterest
Labels: DAP

1. In all honesty, I think the opposition parties in Sarawak are really working their arse out to make inroads into Sarawak political scenario. I most of the time wonder whether ruling party politicians would change their ways. Now the elections are by the corner and nothing in the political firmament indicates any readiness by the ruling politicians to change from the flawed style of the past.

2. For a state that has imminent state general election, there are no indications of leaders tackling issues heads on. There are no defensive campaigns, no credible reply to issues highlighted in Sarawak report for example and these politicians are not seeing anything wrong with it. It is sadly business as usual.

3. Sarawak political scene is filled with some of the most selfish individuals whose only lust for power for their own sake is the major propelling force. Come to think of it, the glamorous five year term of political office holders is really a shame because a whole year is normally devoted to enriching oneself for extra five year term.

4. This couple of months will see these political clowns showing their faces at mosques, temples or churches for renewal of an existing mandate. Conversely, politically naive opposition parties would rather engage in childish acts of mudslinging than bring in superior political strategies.

5. Again the clamour by some opposition pundits after they went all over the state condemning the ruling party is quite telling. We saw some of the so-called party chieftains who formed opposition parties went round the state saying all sorts about the government are themselves hypocrites of the highest order. It makes me wonder during previous state election why PKR or DAP let “certain BN candidates” won uncontested. Why neither PKR, PAS nor DAP raise the controversial reversal by Bank Negara for Maybank acquisition of BII of Indonesia? Is there a conspiracy? Now like dogs they go back to the people to swallow their vomit in clear display of greedy politics rather than their supporters’ interest first.

6. What one can conclude by some of these election year returnees is the fact of poor individual electoral value. It is symbolic that these so called politicians are reportedly seeking personal glory. With desperados like these, voters beware. We ought to realize that the hypocrisy of these political hoodwinks in their desperation for power is the major reason we have flawed elections.

7. As the state election draws nearer, we are not hearing any talk from either side about how the fortunes of Sarawak can be improved rather there is a plethora of political jetsetter urging their Presidents to seek fresh mandates. None of these jokers are concerned about the security issues, the infrastructural decay, the lack of delivery on election promises etc. Their main concern is only their relevance in the political system.

8. Lately in Sarawak politics, we noticed candidates from either PBB or SUPP are often chosen from government pensioners (old folks) who have had prominence in the past and had nothing to be remembered for. They are mere apple polishers whose continued ambition of relevance in governments has kept Sarawak low on the developmental graph.

9. The so-called opposition is not any better either. Some of them are so ill-informed they seek 'revenge' through very disgusting means. They employ character assignation strategy and all sorts of mean posturing in other to grab power.

10. There must be clear guidelines about the people who can stand for elections. Character is still an issue in governance as from the beginning of times. Those without character cannot give what they do not have and it shows in the way they pursue political offices. As the saying goes, a good product markets itself. More often than not, good people know where to draw the line in their pursuit of life's many challenges.

11. One basic problem with our choice of candidate is that we have for long allowed the wrong people access to positions which they pursue with the mindset of going to the laundry. When they have nothing to give them relevance, they try their hand into politics and seek relevance by all means. That is why a politician takes to a life of sycophancy as a means of livelihood.

12. It would pay us as voters better to see beyond the integrity of candidates and refocus on our ballots. There is too much hypocrisy in the system to assure of meaningful election. We might just be playing the Ostrich by feigning ignorance of the role most politicians play in ensuring better future for our children.

Email ThisBlogThis!Share to TwitterShare to FacebookShare to Pinterest
Labels: PKR

We don't care what you know. We want to know, do you care? If you show us you care, we will follow you anywhere. - Anonymous

1. A leader today may be suffering from lack of confidence from own team mates. As a leader he is as highly visible, vulnerable targets of discontent, caught in crossfire between elders and the aspiring young. Expectedly, the chief's job can at times be a thankless one.

2. So as a willing leader, he is exposed to susceptible and target for both sides. He usually does an excellent job dodging the accusation being thrown by the public and the various interest and pressures groups. The really tough part is when forces from within begin the dagger. And the job becomes toughest when that most devastating of all is the vote of no confidence.

3. Throughout human relations process, the role of the leader is a crucial one that needs to be thoroughly understood if a fruitful relationship is be achieved and maintained. The moment the new team has been recognized, the leader must be prepared to devote more time and attention to mending relations. The leader must become educated about what is undoubtedly a difficult arena and be willing to work toward rapport with members representing the grassroots.

4. The leader who understands the role in a committee relations process is likely to be one who deals open-handedly and recognizes fully the individual right to exist and to represent its members' wishes. Such a leader is also willing to commit to a harmonious relationship--bearing in mind that the members are still voters.

5. Indeed, failure of a leader to participate fully in the leadership relations process and to recognize and communicate the need for an open, harmonious relationship with the team mates may itself be the root of no-confidence vote, often even triggering it.

Posted by Muhammad Abdullah Bin Zaidel at 10:59 AM No comments:

Email ThisBlogThis!Share to TwitterShare to FacebookShare to Pinterest
Labels: PKR

The controversy over Malaysian Chinese voters that have instilled bad sentiments on the BN government may appear silly to some. It is not. Indeed, the issue is deeply serious. We hear talks that predict SUPP will be wiped out in this coming Sarawak state election. Your guess is as good as mine!

It highlights a fundamental fact the Chinese community are clannish. It’s becoming clear that many Chinese, mainly those who supported DAP are willing and ready to submit totally to the belief of Chinese supremacy. You don’t see Chinese patronizing Bumiputera shops or restaurant do you? well one or two with a couple of Malay friends. Why? But you see unwary Malays frequenting Chinese eatery with notices like HALAL MUSLIM FOOD or SERVE NO PORK and sundry shops. Well who are unintelligent?

Look at DAP in Penang, Guan Eng announced recently that there is no more low cost housing scheme, instead they will be doing flats like Singapore’s HDB, the Malays dominated area will be redeveloped into mixed development and more Chinese will be relocated in this area in order to break the Malay dominance on the Island into smaller groups. Well who are unintelligent?

In the occupied territory of Gaza, Jewish resettlement are carried out sporadically. In Penang the pattern of break and divided strategy is applied the same to secure DAP holding onto the government. I personally think that Parti Gerakan can never able to wrist back the Island what more MCA. Penang is a gone case.

They don’t need Federal government funding anymore, because they got the Singapore government support already. Singapore government is expected to pour in billions of Singapore Dollar to do land reclamation in Bayan Lepas. Soon the state constitution will be amended to have the post of elected Mayor instead of the present Governor position. Nanyang University of Singapore is setting up branch campus on the Island. Capital Land a Singapore GLC is going big time in Penang. Well who are unintelligent?

A PKR is finding DAP as their allied. You support PKR you support DAP. Well who are unintelligent? Before over-pleasing the Chinese folks. The Sarawak state government should pour in all their Ringgit to developing the Bumiputera communities that have given them the vote all this while. The Majority of the Chinese is not hard up for government assistance. Just let all the 15 Chinese dominated constituencies go to opposition and let them have no representative in the government. Let them shout in the Assembly Hall till they drop, because this is their choice!

Posted by Muhammad Abdullah Bin Zaidel at 11:40 AM 3 comments:

How old are you?